This site is a virtual memory of Viennas Southern Railwaystation "Wien-Südbahnhof" which has closed on December 13th 2009 and was demolished in 2010 to make room for the new "Hauptbahnhof".

After long political discussions the building of a new "Hauptbahnhof" was fixed at the end of 2007. We have started our project in January 2008 with some photos of architectural details from the station which was build in the fiftieth of the last century. Many visits and hundreds of pictures will follow...

Exploring a lot of new corners and unexpected views we have tried to come closer to the building and the surroundings for almost two years. At the same time the building was in a permanent change as objects, shops and platforms disappeared.
Our pictures where taken with digital compact cameras (Canon IXUS 55, IXUS 850 IS, IXUS 870 IS) and rather intuitive than in a systematical way. Not the "perfect picture" was important but to have a closer look at some details, objects or structures in and around the station in a more documentary way. We gave us a lot of space and time to walk through the halls and platforms catching the atmosphere of half a century of the past. During our last visits we finally created the series of night pictures and the photos of the new "Ostbahnhof"


The big final party "Urban Destruction" was an unique event in Vienna as this party was visited by a representative summary of people from this city – in the same way as the railwaystation was during their "lifetime".

Wien-Südbahnhof has had the architectural flair of the postwar fifties of the last century, an open and spacious architecture with a touch of metropolitain character which always was underestimated. Although the station had very different personal meanings it was the most interesting railwaystation for us in Vienna.


During our project we asked a friend to create some renderings showing the many different parts and levels of this station, thank you Peter Hiller for your creative input! 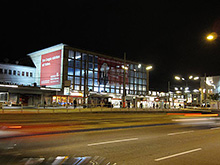 Announcement from the platform South